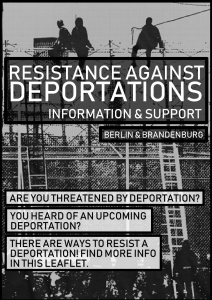 A new leaflet has gathered a list of potential tactics to use in resisting one’s own deportation. Are you threatened by deportation? You heard of an upcoming deportation? There are ways to resist a deportation! Find more info in this flyer. In Arabic, Farsi, French, Tigrinya, Serbian, Urdu, English, Russian, Pashto and German.

More info in our project: Resistance against Deportations