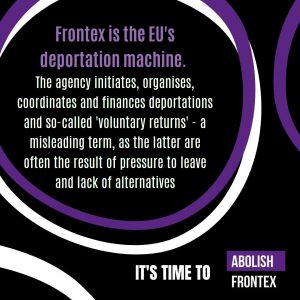 Frontex is the EU’s deportation machine. It is increasingly involved in initiating, organising, financing and coordinating deportations, with the goal to increase the number of people being deported from EU member states. As Frontex wrote in its recent evaluation report: “in the 1st half of 2021 Frontex supported the largest number of returns ever in one semester”.[1] 8239 people were deported, twice as many as in the same period in 2020 and even 9% more people than between January-June 2019, when there were no COVID-related travel restrictions yet.[2]

So what does this “support of returns” imply? Amongst others, Frontex coordinates joint deportations (so called joint return operations (JRO). If there are seats left on a charter deportation flight, other EU member states are invited to participate in the deportation, in Frontex own words to “ensure the cost-effectiveness of returns by charter flights”. Since the 2019 EBCG regulation came into force, Frontex can also initiate deportations a.o. through chartering of aircrafts. Moreover, it can now implement a Standing Corps, including Forced Return Escorts and Support Officers (FRESO) and Return Specialists, the former directly supporting the implementation of deportations – a practice it tried out in 2021 twice, in Italy and Germany. Next to charter flights, Frontex also finances and uses scheduled flights to deport people.[3]

Germany is by far the main user of Frontex’s “deportation services”. Frontex enables multiple mass-deportation charter flights from Germany per week. Every charter flight means deportation raids breaking through doors in the middle of the night. It means being locked in deportation prison. It means sitting with handcuffs in a plane full of cops.

Between January and June 2021, more than 90 % of all charter deportations (2.802 people) with the involvement of the Federal Police were paid for by Frontex.[4] Also in European comparison, Germany is first in line: According to Frontex, from the total of all people deported by Frontex-paid charter flights, in the first half of 2021, 56% were deported from Germany (2.742 people).[5]

Where does Germany spend Frontex deportation budgets? These millions end up in the pockets of a number of deportation airline charters, who have no problem with racist deportation profiteering. This list includes companies like Privilege Style, Danish Air Transport, Enter Air, Corendon Airlines, Sundair, Titan Airways.

Since 2019, Frontex has also been involved in so-called “voluntary return”. However, the term “voluntary” departure is misleading. For it belies the fact that many people are pressured by the authorities to agree to leave the country. Often the nominal consent to leave is the result of pressure to leave, coercion and lack of alternatives. Many ultimately agree because they are threatened with detention or deportation as an alternative.[10]

The number of so-called “voluntary” returns is expected to increase massively in the future. The EU wants to introduce “a common EU return system” with greater involvement of the border management agency Frontex.[12] The agency is also to advise on “voluntary” return and implement it to a greater extent. In addition, the agency is to be involved in the post-return phase in the future.[13]

According to reports from activists, NGOs and the media, Frontex is also involved in the practice of push-backs or legitimizes this practice, which is contrary to international law, by cooperating with national authorities that carry out such push-backs. Push-backs are also a form of deportation, albeit outside the legal framework. In the Aegean, the border closure agency tolerates and supports the systematic and illegal push-backs of people fleeing by the Greek coast guard. In the Central Mediterranean, Frontex provides the so-called Libyan Coast Guard with the locations of boat people without sharing them simultaneously with non-governmental organisation vessels in the region. In this way, Frontex enables people on the run to be dragged back to Libya, where they are often detained, tortured and raped.

A new “repatriation offensive” in Germany?

Deportations are acts of violence by nation states that restrict our individual and collective freedom. This practice serves to perpetuate global inequalities created by (neo-)colonialism, racism and capitalism. Frontex is a central pillar in this system. And it is growing exponentially, with a proposed budget of more than 750 million euro for 2022.[14]

The new German coalition government has promised a “repatriation offensive” (“Rückkehroffensive”) as part of its immigration and asylum plans, so it is likely that Germany will continue to be a significant or become an even bigger user of Frontex’s deportation services.