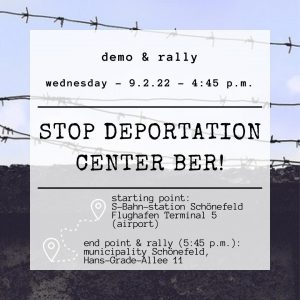 The German government is planning a new deportation center at BER airport near Schönefeld. The new alliance “Abschiebezentrum BER verhindern” is organising to stop their plans! Join the first DEMO on Wednesday, 9 February at 16:45 to raise our voice against this project! We will march to the municipality meeting while Schönefeld politicians are discussing construction plans of the new center. Below you’ll find the callout as well as social media sharepics. Spread the word on all your platforms. 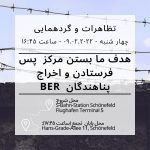 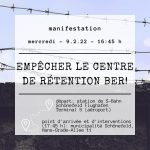 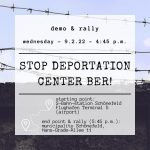 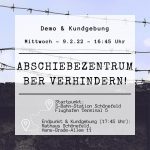 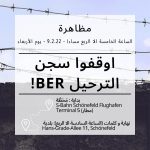 The ministry of interior of Brandenburg announced that they are planning to build a so called “entry and exit center at BER airport” in Schönefeld until 2025. Thereby, the German government is trying to establish a pilot project with the aim of accelerating and expanding restrictive asylum procedures as well as deportations. The construction on an area of 4 hectares is planned to start this year and will comprise buildings for arrival, transit, custody and deportation. So far, the planning process was highly intransparent and undemocratic.

At the BER airport, there already exist facilities to detain migrants, refugees and travelers like the so called “Ausreisegewahrsam” where up to 20 people can be detained for a short time in order to ensure their deportation. The new deportation center will include several forms of migrant detention under one roof such as Ausreisegewahrsam and detention during airport asylum prcedures, due to the denial of entry by arrival at the airport and prior to Dublin transfers. The central foreigners authority of Brandenburg (ZABH) has predicted a steady increase of incarcerations at the planned deportation center. They expect 300 airport asylum procedure cases, 600 cases of custody as well as 150 cases of deportations by the year of 2025 and 300 cases more in 2040. Even though the government of Brandenburg has agreed in their coalition agreement not to build any deportation detention facilities where people are hold for prolonged periods of time (Abschiebungshaft), we do not trust this promise!

All detention of people due to not having the “correct” visa or legal status is racist state violence that people in power are trying to normalize, invisibilize or euphemize! In Germany, for several years it has been clear that more than 50% of people in Abschiebungshaft are illegally detained. We are convinced that 100% of people are unjustly detained! By being forced to obtain visas and residence permits, being forced into refugee camps and asylum procedures, Black people and people of colour are systematically deprived of a self-determined life and a free choice of where to move and live.

We do not accept the systematic racist oppression, deportation and discrimination of human beings! Thus, we will resist the detention and deportation of anyone, in any circumstance!

Abolish all prisons! Abolish all camps! No Borders! Against all Racism! Freedom of movement for everyone! Bedingungsloses Bleiberecht für Alle! 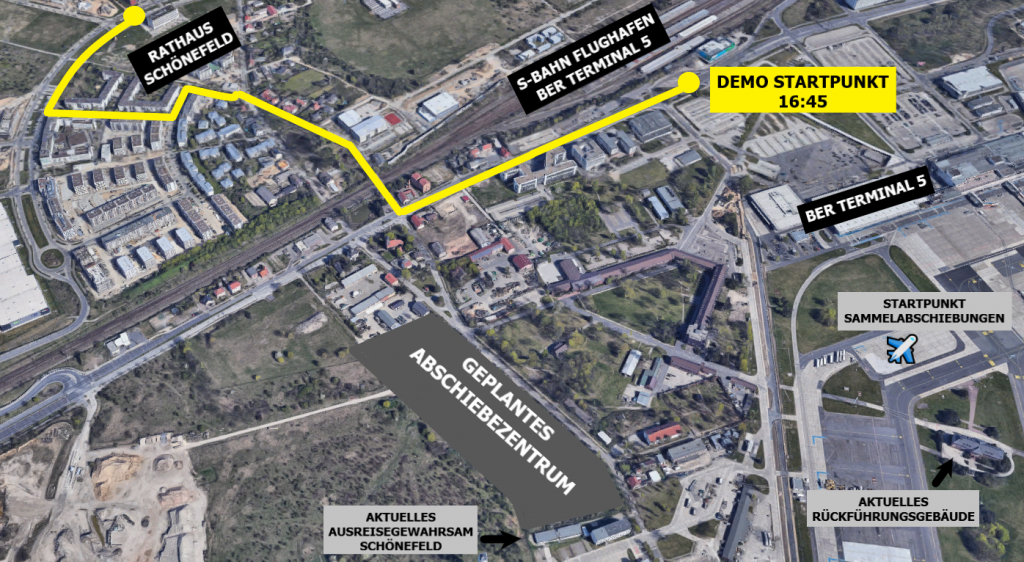