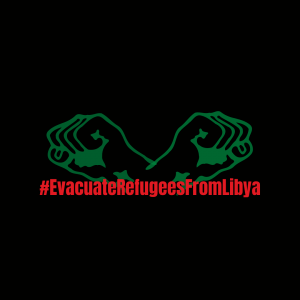 Refugees in Libya started their protests in October 2021 – yet the conditions for refugees in Libya remain the same. They are exposed to structural violence, arbitrary detention in inhumane conditions, torture, enslavement and murder. People are still drowning in the Mediterranean daily or being pulled back by both the so-called Libyan coast guard (LYCG) and the newly established Stability Support Apparatus (SSA). The European Union (EU) is contributing to these atrocities daily by funding and training the so-called LYCG and supporting structures, which are holding the current system in place.

Still, the echo of the protest of Refugees in Libya is ignored in the European public discourse.

Since 2017, when the Italy-Libya Memorandum of Understanding was signed, enough evidence, reports, statements have revealed the strong links between the so-called LYCG, Libyan migration authorities (DCIM), militias and smugglers. Enough reports denounced the crimes committed against refugees and migrants in Libya. The United Nations (UN) and International Criminal Court (ICC) are even denouncing crimes against humanity committed in the detention centers, which are sustained by the Memorandum.

On November 2, 2022 the Italy-Libya Memorandum is to be renewed – it is the backdoor of the cooperation of the EU with the militia-led Libyan coast guard, the hellish detention system, and the silent tragedies of thousands of invisible deaths in the Sahara at the southern border.

In Solidarity with Refugees in Libya, we want to take to the streets all over Europe to stop this memorandum, on Saturday October 15, in front of the Italian embassies of our cities.

All actors involved in this Memorandum have to put an end to this criminal agreement:

By sustaining the Italy-Libya Memorandum, Italy, the EU, the so-called LYCG, Frontex, UNHCR and IOM become accomplices of slavery, trafficking of human beings and crimes against humanity.

JOIN OUR ACTIONS ON OCTOBER 15 IN FRONT OF ITALIAN EMBASSIES IN BERLIN, BRUSSELS, MADRID OR ORGANIZE AN ACTION IN YOUR CITY ✊

Who we are: Solidarity with Refugees in Libya and Abolish Frontex – with the Permanent Assembly “Right to migrate, right to stay”