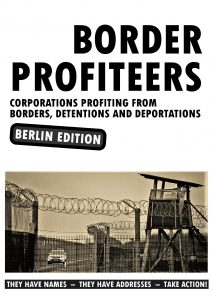 This brochure has gathered a list of corporations that profit from deportations, from managing detention centers, from building fences, selling ships, drones or planes patrolling the Mediterranean, subcontracted security guards, providing data collection, border surveillance software, id control mechanisms, racist policy consultation, prison construction and any other form of oppression that limits peoples freedom of movement and right to stay.

The external borders of Europe are not in Berlin, but the border regime is all around us. This regime consists of more than just the state. In capitalism, many forms of border oppression are subcontracted to corporations. Borders are very profitable. Therefore this market is dominated by huge multinational corporations. And since keywords of the European borders are militarisation and surveillance, the list of corporate border profiteers is full of the usual suspects that also profit from war, prisons and privacy infringement.

The goal of this booklet is to promote action in Berlin and Brandenburg. Hence the focus is very much on companies that have an office in Berlin or action possibilities based on local struggles.