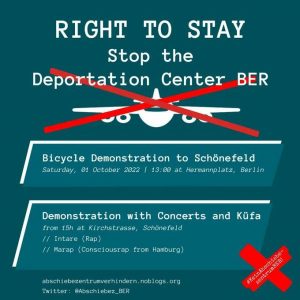 Germany is turning the Berlin airport terminal 5 into a Deportation Center, including two prison buildings with a capacity to imprison 120 people. The plan is to start construction of this new center in the next months and aim to have it in operation from 2025. We, as “Abschiebezentrum BER Verhindern” call on everyone to loudly and fiercely take the streets and block with us this racist and neo-colonial plan! Therefore you are invited to join us on the street during a Bicycle Demo starting at Hermannplatz 13:00 going to Schönefeld, next to the planned construction site. From 15:00 until 19:00 we will protest in Schönefeld with a Küfa, Concerts and Speeches.

🍽️ SOLI-KITCHEN 🍽️ & 🧃 SOLI-DRINKS 🧃
There will be vegan food for dinner by Kiezkantine
Some non-alcoholic drinks will be available.

🚲 BIKE DEMO 🚲
Anyone who’d like to bike from Berlin to there: we start from Hermannplatz at 13:00 and follow a registered route together in a loud bike demo.

🔎 POLITICAL TOURS 🔎
There will be short, small-group walks from the protest to politically relevant location nearby, such as the current deportation prison, the usual starting point of charter-deportations, etc.

💥 PROTEST AGAINST DEPORTATION 💥
Let’s remember this is not a party! It’s placed next to a current deportation prison. We will be loud and angry: let’s use the space to get to know the area and each other, so we can be strong in the upcoming years of resistance.

“Today’s publications by FragDenStaat, rbb and the ARD political magazine Kontraste demonstrate the questionable means the Brandenburg Ministry of the Interior is resorting to in order to push through the construction of a deportation center at BER Airport, bypassing its own coalition partner and the state parliament. It is not only a political scandal to keep these plans secret even from the own finance minister. From the very beginning, the Ministry of the Interior intransparently cooperated with a flimsy investor, which is later presented as the supposedly only option.

The real scandal is that a deportation center is being built at BER in which refugees are deliberately isolated and locked up. Planned is a deportation detention center to hold 120 people and perspectively the center could even be expanded to a deportation prison,” says the press spokeswoman of the initiative “Stop Deportation Center BER” Alexis Martel.

“The shady deals of the company Harder & Partner were and are known to the Brandenburg Ministry of the Interior. Apparently, Jürgen B. Harder can determine the political conditions in favor of its new large-scale construction site “deportation prison”. This is in his interest: Because millions can be earned with the racist business.

While European governments are increasingly undermining the right to asylum, Brandenburg and the federal government are pushing for even more deportations. Since the plans for the deportation center became known, we have made it clear: No one is illegal. We stand against all forms of racist detention of refugees, whether it is called custody pending departure, deportation detention center or airport asylum procedure.

About “Stop Deportation Center BER”
The initiative was founded at the end of 2021 to organize against the planned deportation center at BER Airport and to take the protest to the streets and online. Most recently, the initiative worked on a campaign against the questionable investment company “Harder & Partner” and called for an online day of action (see also https://dumpharder.neocities.org/). 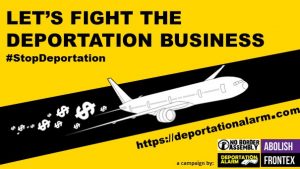 European airlines are making profits with deportation charterflights from Germany. We will call out their racist deportation business until they #StopDeportation. Join the online action!