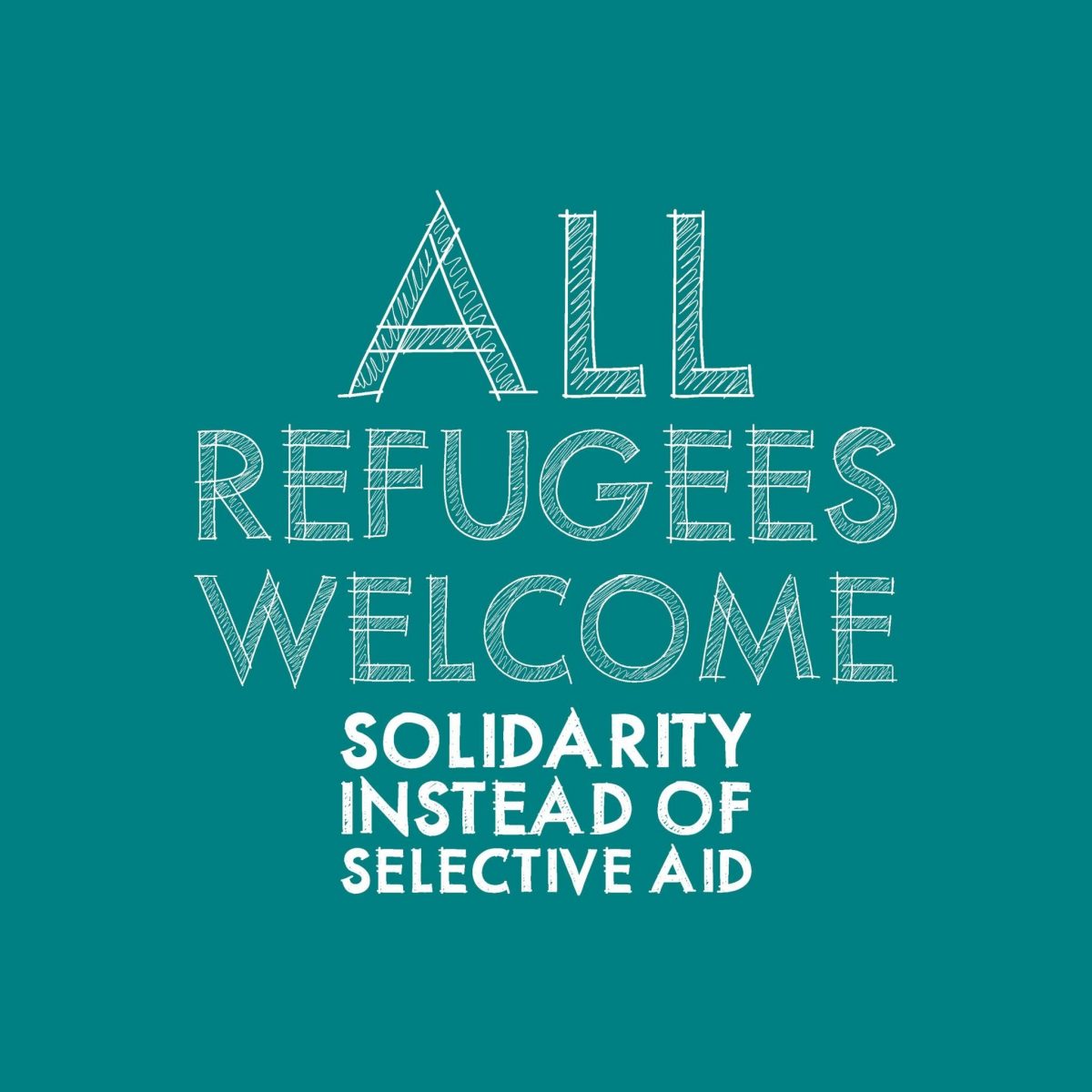 The simultaneity of spontaneous support and the racist border regimes at Europe borders.

We are people who have been working for the rights of migrants and refugees in the struggle against injustice and domination for several years. And we address all of you: who in recent weeks have picked up people at the border, opened your homes, collected donations, sacrificed time and energy. – Thank you!

We are thrilled by how many people are currently acting in solidarity in response to the war in Ukraine. Within a few days, stable networks have been built. It is just great. Let’s not leave it at that, Let’s create a long-term solidary process – a process in which we support each other and nobody is forgotten or left behind.

However, our joy at this spontaneous solidarity movement is clouded by the hypocrisy of European governments. States, parties, companies and official media call for solidarity. This makes us want to vomit! No, the EU is not in solidarity. It pursues a racist exclusionary policy. This policy wants to welcome only certain refugees. For years, Europe’s violent and inhumane border policies have been tacitly accepted and even justified by its goverments. Refugees are criminalized for seeking asylum. And for years activits fighting for the right of asylum have been criminalized.

And now we have to observe with horror that NGOs, support the legal distinction between refugees. They advise against helping non-Ukrainian refugees at the border. Is the live of refugees with an Ukrainian passport worth more than the lives of the others? Where is Germany’s willingness to take in people who have been beaten up for months on the Belarusian-Polish border, suffering illegal pushbacks and freezing to death there? Where is this solidarity on the Mediterranean, where over 23,000 people have drowned trying to flee since 2014? How can it be that Poland is currently building a wall on the border with Belarus with the blessing of the EU. Where is the outcry?

The lack of willingness to help and a deterrent border policy are calculated: the German state and many other European governments have been eroding the right to asylum for decades. They have put people in terrible camps and deported them. European countries are building a “Fortress Europe”. And it is the Western industrial countries and companies that for centuries have pushed on the destruction of living conditions in the Global South – through slavery, colonialism, land grabbing and the explotation of the people in the global south as well as trough economic and political influence via weapon deals, free-trade agreements and coups d’etat.  The Oranienplatz Movement in Berlin, together with other self-organized migrant-based groups, have criticized this imperial European policies for years. They said

“We are here because you are destroying our countries!”

You can’t say it more clearly.

We should not forget where wars and crises come from. he EU plays a significant role in conflicts and crises worldwide, such as the Afghanistan war. We should furthermore not forget that this war is not new. It is also not the first one in continental Europe for 76 years. Every day there is war. Germany is not a solidary state, but the fourth largest producer of weapons! The humanitarian aid of the German state that differentiates in its help between skin colors and passports is hypocritical, racist, and neocolonial double standard.

Let’s fight together against this and make solidarity our everyday practice, now and in future! Self-organized groups and alliances like the Tubman Network, who are just explicitly working for the admission of BIPOC*, Sintize and Romnja*, LGBTQIA+ and TINF*, have been showing us for a long time how this solidarity can be lived.

We call on everyone to become part of a larger and long-term solidarity movement – borderless, anti-racist and critical of the state! Let us not be played off against each other. Let’s break with the narrative that there is legitimate wealth and self-inflicted misery. Let us oppose the narrative that solidarity should only apply to certain people. There are neither first and second class seekers of protection, nor illegitimate reasons to seek asylum in Europe. No human being is illegal! Migration is a human right!

Let’s fight together for equal rights for all people.
Let’s distribute resources according to needs and not according to bank balance.
Let us reflect on the role of Europe in the destruction of the world and the exploitation of people and build our political action from this.

To all of you who have made solidarity your own practice as a result of the war in Ukraine: stay active! Use your structures, exchange ideas, respond to the calls, come to the streets with us, organize permanently!

The groups under following link have been active for years and are looking forward to meeting you: https://noborderassembly.blackblogs.org/network

Together and hand in hand we are strong enough to build a better world – without racism, borders, capitalism and oppression!